LEGO Life App and The Slow Death of Childhood Play

Late one evening in 1999, I made a late-night Wal-Mart run with some college friends. This trip is only memorable because it was the first time I saw a man ecstatic about buying LEGO sets. His smile spread and his eyes glistened with joy as he found the display of newly released Star Wars LEGO sets.  At twenty-two years old,  he was finishing his college degree and despite owning the latest and greatest video and computer games, still held an unashamed passion for these toys and the creativity and imagination they represented in his life.

I found this very bizarre but endearing. Two years later I married him, LEGO sets and all.

Fast forward eight years and my husband and I adopt our first son. It wasn’t long before my in-laws began handing over old storage containers full of LEGO bricks they had stored for years. Undoubtedly, waiting for the day another boy would join the family.

Around age five, our son’s passion for LEGO exploded. With each passing year he dedicated every birthday and Christmas gift towards collecting every set he could. Harry Potter, Ninjago, Lego City, Lord of the Rings, Pirates of the Caribbean, Superheroes, Minecraft, and Technic sets accumulated into messy piles all over his bedroom floor. His creations lined the shelves in his room.

Once our son learned to read we signed him up for a free subscription to the LEGO Magazine. Our son delighted in receiving his magazines in the mail. There was a new world to be created and explored every time a tote was poured out onto his floor. The magazine reminded him there was no limit to his imagination.

Despite our son’s love for reading books and his zeal for Minecraft and other video games, he continues to build with LEGO. Those scattered piles still persist on his bedroom floor because he knows Dad will always join him when he plays. Their father-son bond was built alongside the LEGO creations on this floor.

In November, our son turned eleven. For us, this wasn’t an age of pivotal change. His play continued on as normal: 1 hour on electronics per day and the rest hands-on active play or reading.

To the LEGO Company, however, eleven is a coming of age year. The age when children move from reading, enjoying, and learning from a magazine to scrolling, sharing and interacting on the Official LEGO Life app. That is, according to their magazine:

“Goodbye Magazine, Hello Future! At 11 years old, you’re finally ready for the next phase, so what are you waiting for?

Upon first reading this propaganda I felt indignation rise up. Who is this company to tell my son he’s grown out of the magazine and into an app? 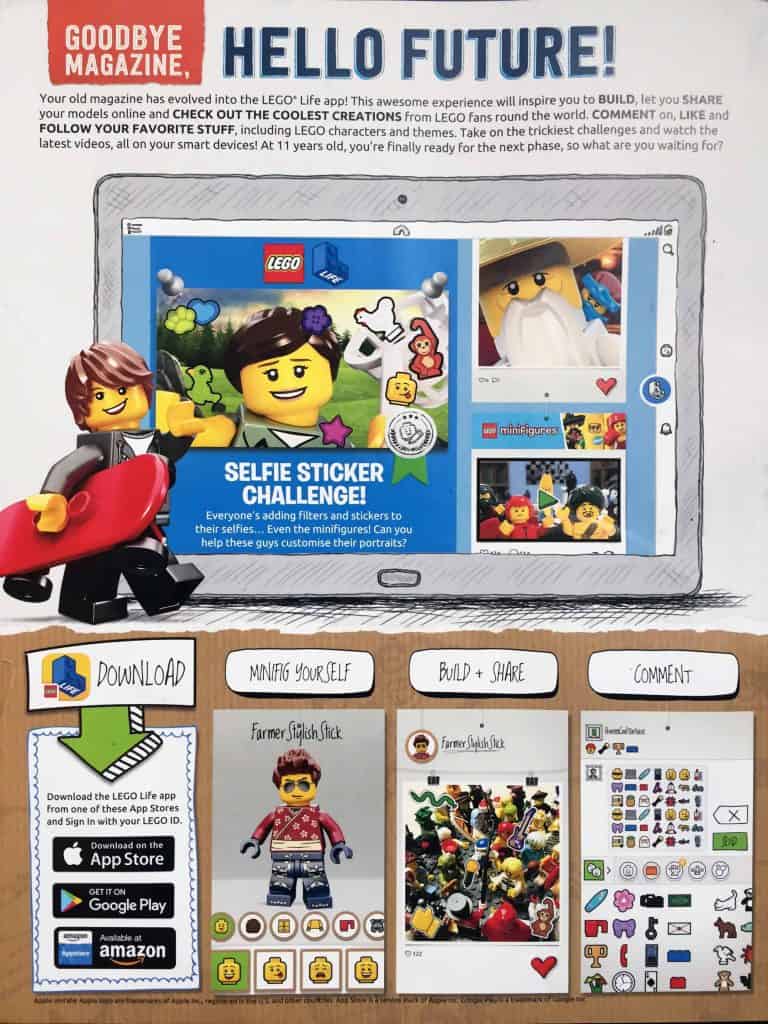 As a family fighting to reduce the societal allure for fame and worship on social media platforms, we don’t want our child to transition from playing LEGO for pure enjoyment to building LEGO for social approval. The magazine offers a few pages of ideas, just enough to stir imagination. A social media app, however, offers an endless feed of ideas, stifling imagination.

Why would I want to replace the precious time hands-on building LEGO sets with time scrolling and staring at a screen? What benefit will manufactured profiles of LEGO characters benefit his imagination or creativity? To what gain is having LEGO videos accessible at all times to his developing character?

It is frustrating how hard these companies are making it for parents everywhere to resist more screen use. Research shows the more screen media children use the more anxious and less happy they are with life. The desire to be liked, valued, and followed on anything social media-like hijacks a brain’s reward center.

It’s hard enough notwithstanding the power these toy brands like LEGO have over children. If LEGO says I’m ready at age 11, then surely my parents are the crazy ones. 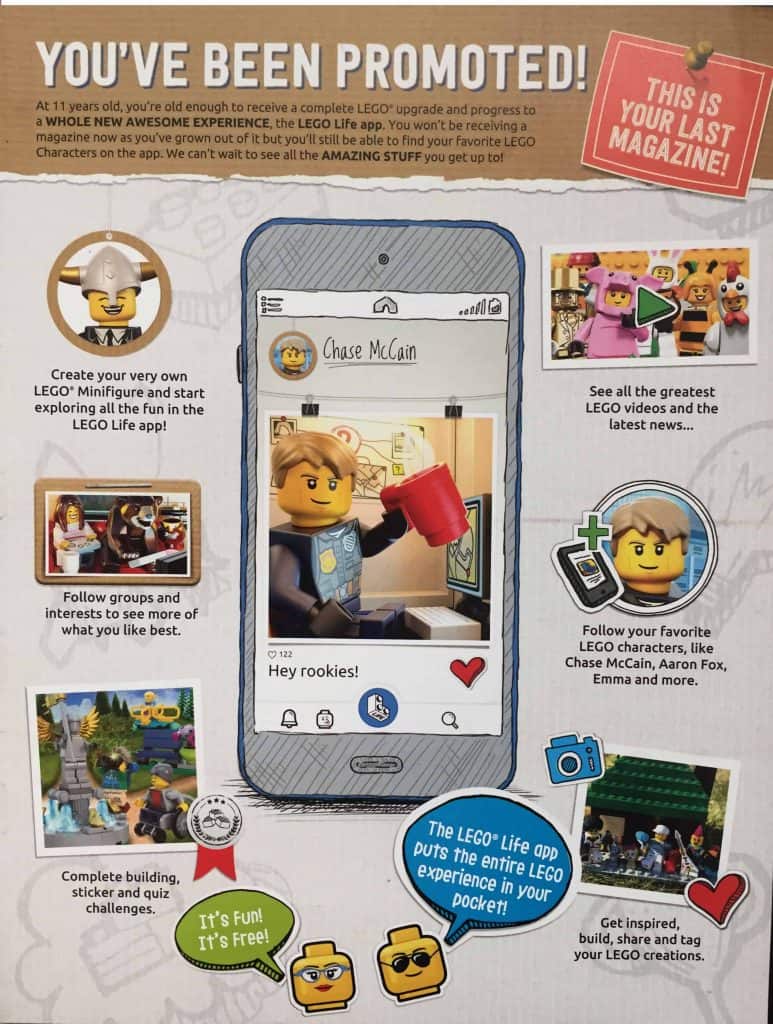 Don’t misunderstand, I love the LEGO company, and from a business standpoint, I understand their desire for an online presence. As a parent though, I read this marketing and mourn how many 11 year-olds (and their parents) have been deceived into believing they need the “LEGO experience in their pocket”. The LEGO app may have gone to great measures to prevent bullying by eliminating verbal comments but it still has the same look and feel of other social media platforms.

If social media has been compared to HEROIN based on its effects on the brain’s reward center, then isn’t a toy-driven, child-focused social media app just a gateway drug?

These apps are another way giant companies are making it so hard for parents to say no. Companies like LEGO are contributing to the slow death of childhood play they helped create by conforming to the mass migration of online play.

Every aspect of a child’s life now pushes them online: schools, sports, toys, television, clothing, and food. Every product has a website and there is an app for everything you could dream up.

Unless more parents limit children’s time on online apps and games, the problem will only continue to get worse. Instead of the gateway drug offered to 11 year-olds it will be 5 year-olds, hooking them as soon they learn to read. (Or are we already there?)

When you really stop and think about it, why do children need to be online all the time? Why do they need to go on the website of the toys they play with or the cartoons they watch? Do they really need an app to go along with that new toy? And why do they need a LEGO app to share their creations when they can invite friends over to see what they’ve built?

Many people submissively respond to these hard questions with the dubious generality, “This is how the world is now, kids need to learn how to live in an online world.”

WHAT IF they don’t need to learn how to live in an online world at five, eight or eleven?

WHAT IF they learned at fourteen or fifteen? We learned in our 20’s and 30’s and seem to have adapted fine. Well, some of us…

WHAT IF the tumultuous time of adolescence wasn’t exacerbated by consumerism, competition, and comparison?

WHAT IF they built character, maturity, and resilience offline during the adolescent and tween years before being unleashed to an online world that is too often full of selfish desires, instant gratification, and unlimited pleasure?

I am all for the process of teaching our children safe and proper use of the internet but the data is mounting. Children cannot handle growing up online. Facebook has admitted that social media can be personally unhealthy and bad for democracy. A National survey revealed over half of teens admit they are addicted to their phones. Studies now show that children who spend less time on screens are happier and more content with life. There is a growing mental health crisis among our youth.

So, no, LEGO, my son will not be downloading your app. We love your tangible products and thoroughly enjoyed receiving a free magazine over the years. Thank you for that gift.

At age eleven our son will still be on his bedroom floor, digging through piles to find the right pieces and dreaming up new creations. He will invite friends from the neighborhood and school to join him.  And he will experience childhood play through his own imagination – not through your socialized feeds of information.

Kelly is author of the book, Managing Media Creating Character, and the founder and executive editor of Brave Parenting. She is a mother of 7 foster-adopted children ages 10-20. Kelly is passionate to help others bravely parent counter to culture and societal norms. She believes parenting is Kingdom work and must be done with the courage and bravery of a warrior of God.
PrevPreviousWhy Sexual Predators Can Still Lurk on Social Media and Prey on Our Children
NextA Parent’s Guide to Shared Data (Not Just on Facebook)Next