Should Girls Have More Restricted Social Media than Boys? 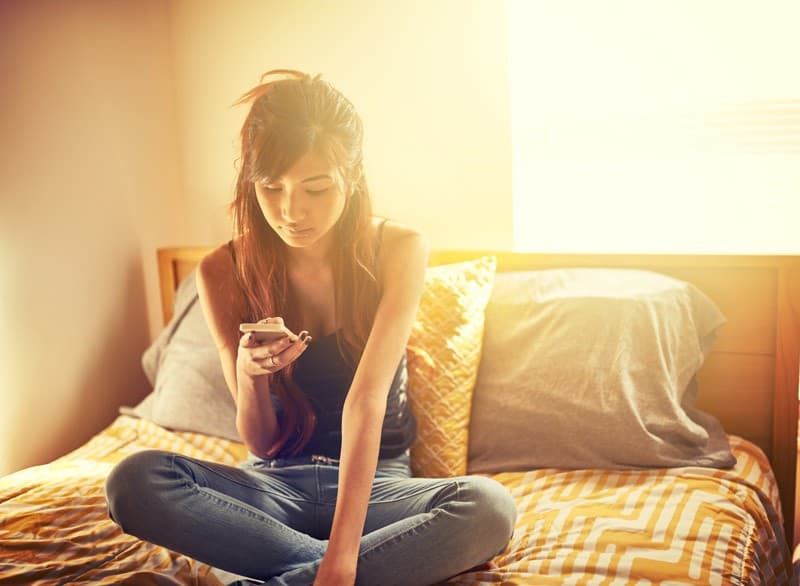 I have 3 girls and 4 boys. Not all of my children are old enough (by my standards) to have a phone or social media but in those who are I have already seen a vast difference in how each gender handles phones and social media.

Personally, I understand girls. Sharing the same gender class provides me the privilege and misfortune of sharing in all the same struggles.

I know the common struggles of every girl: body image, self-esteem, changing hormones, insecurity and so on.

I know them. I’ve lived them. I still battle with them.

Few women would ever chose to go back to middle school, junior high, or high school because they can still vividly recall the emotional warfare waged during those transitional times.

Being a young female is just plain hard.

For my boys, everything is different. They are not emotionally driven but are driven by adventure, challenge, and respect. My husband does not relate to any of my stories of struggle growing up because his struggles were completely different. Here’s what I’ve learned about males.

My boys don’t plan to wear matching outfits with their friends just to evaporate some of the social pressure of image and status. They don’t mess around with who’s their friend – off today back on tomorrow. They are either your friend or not. They don’t conjure up self-deprecating scenarios in their head as to why another dude shrugged off his hello. My boys can flip their obsessions from Stephen Curry’s 3 pt record to a pretty girl to pizza without looking back to other.

For us parents, if it was hard for us  as we grew up – without social media pressure – we cannot fathom the difficulty our children now face every day.

Growing up 20-30 years ago, our world didn’t include selfies, the instant and impersonal communication of texting, social media likes, Instagram highlight reels, Snapchat stories, or hashtag anything.

When we were bored – we were like, legitimately bored. Now, it’s just different. Bored today is playing, posting, texting, tweeting, kiking and snapchatting.

Because we didn’t grow up with these internet anomalies this almost makes us irrelevant to our growing children.

Almost, but not totally.

You see, while the landscape has changed – the war is the exact same. For our daughter’s, it’s the war over their purity, self-esteem, body image, self-confidence, and intelligence. For our boys, it’s a battle for masculinity, heroism, and respect. These war zones are the same we fought through, our children are currently fighting in, and our grandchildren will continue to fight in.

Yes, we will always fight the same enemy about the same things, just in a different arena and with different weapons.

As parent’s who, safe to say, have survived the war, there’s wisdom we can extend our sons and daughters: We know where the enemy currently stays and fights. We may not have fought in same arena ourselves but we can easily see the enemy’s traps (because they are all the same) and can keep you from becoming ensnared.

As BRAVE PARENTS willing to fight for our children, our battle plan for this current war is this: NO social media accounts and NO selfies – none taken and none posted or sent anywhere.

Social media is the enemy’s chosen battlefield and where he has the advantage over our children. This is where he captures (especially) our daughters in order to steal, kill, and destroy.

In case you haven’t noticed, the enemy is winning this war – predominantly over our girls. He is stealing innocence and purity through sexting and pornography, killing self-confidence and self-esteem through competition and popularity driven “likes”, and destroying their good name and reputations by deceiving them everything they do or say is “safe”.

We’ve tried to allow some social media but simply couldn’t deal with what we saw. The ugliness, vulgarity, hypocrisy, and the promotion of self among the teenage generation is so heavy and burdensome. I saw it change my daughters – what they valued, how they responded, and how quickly it led them into sin. I couldn’t find a single way social media was shaping my daughter into better women. I believe it is just a massive weight, slowly pulling a generation down. It’s a weight I refuse to allow my children to take on and sink.

My kids hate us right now because of this rule. And that’s okay. This is part of being a BRAVE PARENT, if they loved us every moment we would be their friend – not their parent.

This battle plan is currently upheld for every child in our home. But primarily it is for my girls, for their struggles are magnified under the microscope of social media and selfies.

I know my daughters will battle insecurity regardless of having access to social media – why put them on the front line of the war?

I know they’ll battle body image regardless of well edited selfies posted to see how many likes it will get – why allow them to develop this cognitive dissonance?

The thing about girls is that the same issues will always be there. At age 37, 18, 14, and 10 – it’s there.  But for me at 37, I know the enemy, how he works and deceives. I can’t be fooled as easy as my girls can.  Until my girls can recognize the enemy they are fighting, I will fight for them.

That is what a BRAVE PARENT does, fight to protect their children from the enemy. What does it mean to fight for them? It means bravely saying NO to the masked and conniving enemy which poses as a popular and desired companion for my daughters. It means rejecting the cultural norms…..just because everyone else is doing it, doesn’t mean your daughter should to.

Is this rule is impossible to keep? No, but it takes ultimate trust in who you want your daughter to become. It will be tempting to cave under your daughter’s pressure and whining over it.

Is this rule is impractical for today’s generation of young girls? I firmly believe that just because a cultural norm has emerged doesn’t mean it’s right or whats best.

And what about our sons? Just because they don’t struggle and get entangled in emotionally damaging social media drama, should they still be allowed access? Just because they may not care how many likes their photo or post  received compared to their friends, does that mean they are immune from the harmful affection of peer comparison and competition? Will they become better men because of social media?

This is a topic of great debate. I’ve found that parents who themselves actively partake on social media love for their kids to have it as well as a point of connection. Conversely, parents who do not use social media find it easier to prohibit their children from partaking. Perhaps you are somewhere in the middle wondering which direction to go.

I encourage you to join this conversation.

What positive qualities have you found enhanced or gained through teenage use of social media?

Acknowledging there is in fact a war over your child, what BRAVE PARENT strategy can you implement as a battle plan to defend and protect your child?

Kelly is author of the book, Managing Media Creating Character, and the founder and executive editor of Brave Parenting. She is a mother of 7 foster-adopted children ages 10-20. Kelly is passionate to help others bravely parent counter to culture and societal norms. She believes parenting is Kingdom work and must be done with the courage and bravery of a warrior of God.
PrevPreviousParenting Bravely – Even When You Think You Suck At It.
NextADHD: To Medicate or Not? An Honest Opinion From a Pharmacist and ParentNext