Why Everyone Needs a Phone Basket

Every year we host a “Christmas Cookie and Hot Coco” party for our middle school aged children. It all began because Grandma, a Cambridge Culinary School trained chef, loves to bake dozens upon dozens of extravagant Christmas cookies for the kids to indulge in. Not wanting our kids to eat them all, we invited all their friends over to share the love. With the addition of unlimited hot chocolate, it has become a memorable event every year.

Despite how our high schoolers want to continually participate, we host this party specifically for our kids in grades 6th through 8th. This is the socially difficult age between the parent-supervised birthday parties of elementary and the unsupervised teenage gatherings of high school. With seven children, we have nine consecutive years with at least one child in middle school, and this year was our fifth annual party. We believe this is the perfect opportunity to introduce them to fun and safe co-ed “parties”.

With each year we notice subtle differences in the children who come. Some children come and sit awkwardly in the living room. Some hang around the cookie table eating their weight in sugary bliss. Others, ignore the cookie table altogether and play basketball outside the entire party.

Usually these differences are due to our children’s different personalities and their peer groups. Over the past several years, however, I’ve noticed the phone becoming more and more of a social crutch for these children. Neither my sixth-grade son or seventh-grade daughter has a smartphone, so there was really no reason why their friends needed their smartphones during the party.

Therefore, I decided to not allow any phones at the party this year.

I truly desired for these adolescents to spend a few hours together free from the pressure of taking, posing, posting, and sharing photos and videos. I wanted them to be fully present with one another – as uncomfortable as that can be as a middle schooler.

As the thirty children began arriving at our home, I welcomed them and asked each one if they had a phone. I then showed them the phone basket I’d dedicated for the evening. For the parents who came to the door (there were many who didn’t) I told them the party would end at 8:30 and their child could have their phone back at that time. We also allowed the children to check their phone while in the basket for phone calls in case of an emergency. No parents complained, most were thankful. 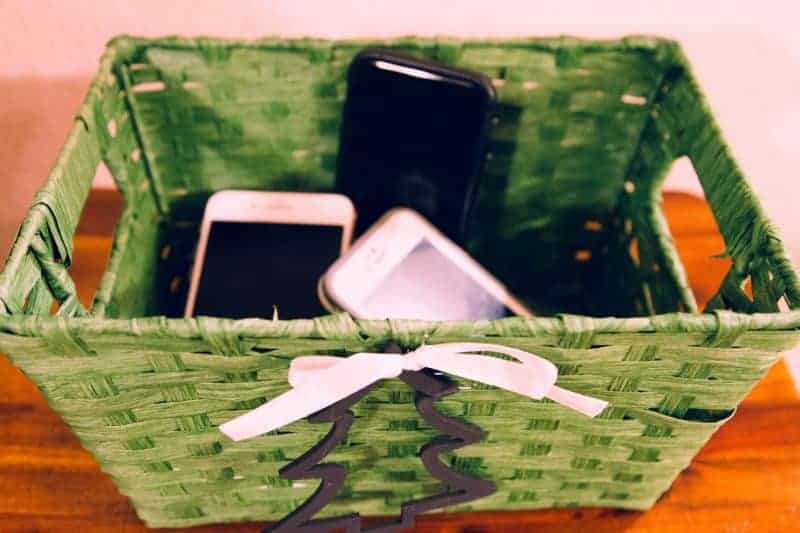 Even though a few girls rolled their eyes and begrudgingly placed their phone into the basket, every child complied.

And so, the party went for 2.5 hours. Sugar was consumed, games were played, and laughter abounded. A large game of charades started upstairs, breaking down comfort zones and evoking cooperation among them. A group of boys honed their communication and storytelling skills outside around the fire pit as they attempted to see who could tell the best ghost story. My daughter got out her guitar and played for friends as they sang along.

This idealistic scene isn’t because these children have grown up together, homeschooling, and in scouts while their families have nurtured these types of gatherings over the years. Not in the least.

These are public school friends, many of whom my children just became friends with this year. I knew only a handful of these children prior, much less their parents. Unlike my children, many of them have smartphones and social media accounts. If asked, many would have rather played Fortnite than board games and charades.

But they came, they put their phones up, they played, the related to one another and they grew in character. Relationships grew stronger by the bonds that comes with shared memories, laughter, and new experiences.

…default to their screens, they stepped out of their comfort zones.

…take pictures, they made memories.

…play Spotify, they made their own music.

…watch a YouTube video of a scary story, they told their own.

…play video games, they played Monopoly and Apples to Apples.

Given the choice, they would not have chosen to place their phone in the basket. Which is why, as parents, we chose for them. We make decisions they wouldn’t make for themselves so they grow and mature in healthy ways.

This is also why WE need a Phone Basket this holiday season.

Even as adults, if given the choice, we will rarely choose to intentionally disconnect from our phone. We are hooked, tethered, and wholly connected to our smartphones. This behavior subtly and silently impacts our most important relationships.

In your picture-perfect image of Christmas gatherings, what do you see? Do you see everyone individualistically staring at screens? Do you see video games? Are people posing for pictures together for social media posting yet not engaging meaningfully in any other way? Probably not your ideal Christmas – it’s not meant to be this way!

Christmas is a time of celebration, reuniting with family and friends, reflecting on the year, and loving others through generosity and gratitude. We’ve come to place where someone needs to make the hard, less convenient, and unpopular choice to insist phones be set aside. For the sake of our humanity, relationships, and memories this time of year, someone must choose this because most will not make the choice themselves!

Here are FIVE tips for how to bravely banish phones to a basket this Christmas season:

Then, you must faithfully trust that relationships are greater than screens!

Trust that what you are doing is right, good, and worthy. You will most likely get push back and attitude. Let it serve as confirmation on precisely why you are creating a phone basket in the first place. Your family may not choose this on their own. When the freedom from the screen is realized, laughter is shared, memories are made, and relationships grown, they will appreciate the free and beautiful gift you’ve given them.

What will your family do all because “they couldn’t text/scroll/watch/play…”?

Kelly is author of the book, Managing Media Creating Character, and the founder and executive editor of Brave Parenting. She is a mother of 7 foster-adopted children ages 10-20. Kelly is passionate to help others bravely parent counter to culture and societal norms. She believes parenting is Kingdom work and must be done with the courage and bravery of a warrior of God.
PrevPreviousApple iOS 12 Parental Controls: Content & Privacy Restrictions
NextResolving to be a Transformed ParentNext