Blindfolded Parenting and the Rise of Snapchat 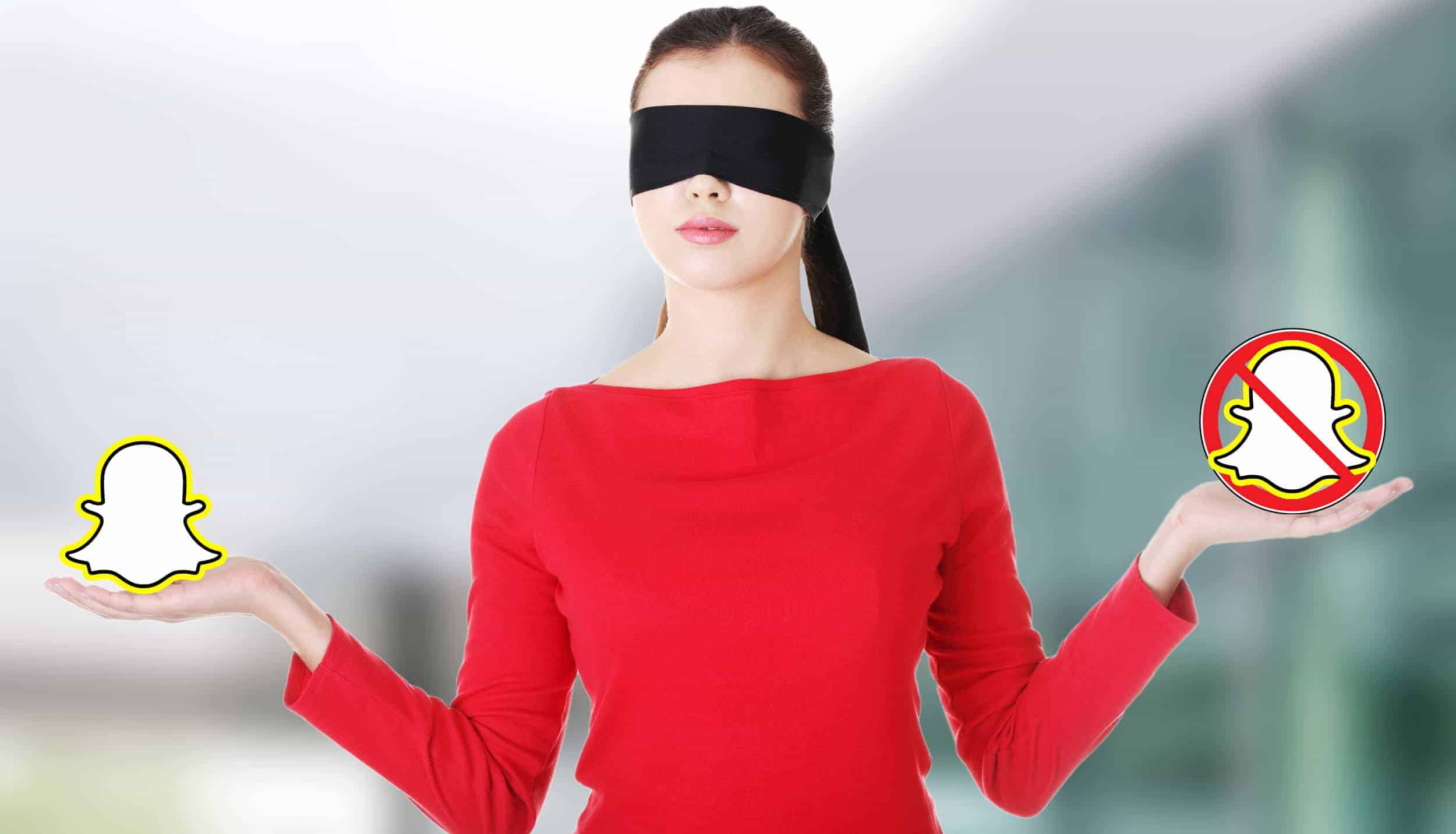 A recent survey of American parents revealed that less than half of parents (40%) know the content their children are seeing through social media accounts.

This indicates 60% of parents are metaphorically BLINDFOLDED to what content is being poured into their child.

Not surprising considering Snapchat, the master Houdini of all social media apps, has taken over Facebook and Instagram as the top used app by teenagers (72%). It’s not a matter of parents never checking on kid’s Snapchat accounts, it’s the fact the content “disappears” once viewed for roughly 10 seconds. Often there is absolutely nothing for parents to check.

However, Snapchat does allow users to save snaps to their “story” but this is only their own snaps – not the snaps they receive from others. Moreover, any saved snap on the “story” only remains there for 24 hours which means parents would need to check it a minimum of every 23 hours.

Nothwithstanding, these “stories” only give a glimpse of what snaps a child is sending and choosing to save for anyone to see. Case in point, there is no way to know what type of snap content your child is receiving, viewing, and consuming from other people.  Snapchat has you blindfolded.

Parents should be very concerned about this predicament.

Some media guidance instructs parents to “chill out and engage with children on a continual basis about social media and teen culture as they build their online presence.” “This way,” they explain, “you can learn about the world they live in and help coach and mentor them through it.”  Additionally, these parenting sages tell us we should not tell our kids “no, you can’t use that app” but rather “yes” and then mentor them through it.

Don’t get me wrong – I am all for engaging, coaching, and mentoring children. Unfortunately, many parents do not realize this common advice often comes from the media giants themselves. The people whose job it is to get teens on-line and hooked on their app. They don’t care about your child or their character – they care entirely about the data they can collect and sell.

Many that benefit from the collected data (including most businesses) wants you to believe SOCIAL MEDIA IS THE NEW WAY OF LIFE. Of course they want to persuade parents to “chill out” and “engage with your kid in this new world they live in” – it is their business’ best interest! The developers of Snapchat did not create it to help shape a generation of children and their character. They created it to make money. Or, as leaked emails elude, it was created for their own sexting.

Even if social media isn’t going away anytime soon, it doesn’t have to be a WAY OF LIFE – especially for young children. There shouldn’t be another “world they live in.”

Furthermore, the “engage and mentor” method seems like a well-meaning desire until we look at from the kid’s point of view.  The entire reason kids are on these social media apps is because their parents aren’t. They don’t want parent’s engagement with them on their social media nor do they desire parent’s accountability, censorship, mentoring, or coaching. This is why they love Snapchat!

Snapchat allows all the “bad stuff” to disappear so no one sees it. Kids using the app don’t have to fret about being accountable or mentored on their activity (sexting, drug deals, bullying, shaming, and completely wasting time) because there is nothing for anyone to see.

An estimated 80% of parents claim ZERO KNOWLEDGE on how to find what their kids do online. Since it’s obvious parents are allowing Snapchat (the dramatic increase in use to take over Facebook) we know parents have bought into the idea of “chill out and give them social media.”

But wait, where is the part we engage with them? Herein lies our problem: Parents do not know how to engage with kids on a disappearing app and even if they desired to, the majority of them don’t know how to.

How have so many parents been persuaded to let this become commonplace without concern? Have we so carelessly forgotten the impact outside influences can have on our child’s character and future?

We have become a generation of parents who give children what they want instead of what they need.

Perhaps you were persuaded to allow Snapchat while you were “blindfolded.” Maybe you had no idea the app could not be monitored and how the images disappeared. Now it is your choice whether you remain blindfolded and in the dark.  Just because Snapchat is pervasive does NOT mean it is good or even necessary. Just because “this is how kids communicate” doesn’t mean it’s the only way to communicate.

It is time to be brave and take the blindfold off.

Character is more important than Snapchat.

You Can delete the app. You can change your account password to prevent your child from re-installing the app.

Choose to courageously defend your child’s character. This can protect them from a lifetime of pain, shame and regret.

When your blindfold is off you see this popular app for what it is: a blend of raging hormones, peer pressure, and assumed anonymity. This blend does not yield digital maturity and wisdom but rather shame, regret, and loss for the child.

Conveniently, this blend also yields a net worth of over $6 billion dollars for its creators.

Kelly is the author of the book, Managing Media Creating Character, and the founder and executive editor of Brave Parenting. She is a mother of 7 foster-adopted children. Kelly is passionate to help others bravely parent counter to culture and societal norms. She believes parenting is Kingdom work and must be done with the courage and bravery of a warrior of God.
PrevPreviousKilling the Silence: 3 Ways You Can Prioritize Face-to-Face Communication in Your Home
NextThe Home Smart Phone: The Better AlternativeNext